The South Florida Water Management District Governing Board is taking aggressive action to protect the Everglades and eliminate invasive pythons from across the landscape. The Python Elimination Program started in 2017 and incentivizes a limited number of public-spirited individuals to humanely euthanize these destructive snakes which have become an invasive apex predator in the Everglades. The program provides access to python removal agents on designated lands in Monroe, Miami-Dade, Broward, Collier, Hendry, Lee, and Palm Beach counties.

The program is now accepting applications for new python removal agents. More information on program eligibility and requirements is available in the "Program Details" and "Frequently Asked Questions" sections below. Due to the high volume of applications we receive, we are unable to respond to every applicant. We will contact you if you are selected. Otherwise, your application will remain under consideration for when future positions become available. Thank you for your interest.

Python removal agents will be paid:

Find out the latest news and updates about SFWMD's Python Elimination Program.

Why is the District Trying to Remove Pythons?

Pythons are non-native, invasive snakes that are established and spreading throughout South Florida. These large constrictors pose direct threats to native wildlife. Pythons cause significant impacts to native prey, such as marsh rabbits, deer, wading birds and even alligators. Their aggressive predation on native wildlife robs native predators, such as panthers, raptors, alligators, and bobcats of their primary food sources.

What are the Target Species?

To be eligible, python removal agents must:

How Many Python Removal Agents Will Be Selected?

There are limited positions available, and we will maintain up to fifty (50) contractors.

Where Can Selected Python Removal Agents Survey for Target Species?

How Will Python Removal Agents Be Compensated?

Python removal agents will receive $10.00 per hour or $15.00 per hour depending on the area for up to ten (10) hours each day while actively searching for pythons on designated lands. For all eliminated pythons, the District will make an additional payment per python: $50.00 for pythons measuring up to four (4) feet, and an extra $25.00 for every foot measured above four (4) feet. See example below:

Python removal agents must provide all their own equipment necessary to engage in program activities.

Can Firearms Be Used to Remove Pythons?

Yes. Firearm use must be consistent with the terms of the Florida Fish and Wildlife Conservation Commission (FWC) permit issued to SFWMD, as well as local, State and Federal regulations.

Why Must Python Removal Agents Have a Smart Phone?

Python removal agents are required to download and utilize free cloud-based time and GPS tracking software, along with an electronic data collection system, on their GPS-enabled mobile device while conducting surveys. These are the methods used to verify python removal agent's time and location while engaging in program activities.

May Python Removal Agents Bring Assistants With Them During Surveys?

Can non-Contractors Remove Pythons From Public or Private Lands?

Non-contractors may remove pythons from private lands with landowner permission, and from certain public lands with no permit required. However, because Burmese pythons are a regulated species, they cannot be transported alive and must be humanely euthanized on-site. For more information on removing Burmese pythons on public and private lands, please visit the Florida Fish and Wildlife Conservation Commission's website at myfwc.com/python.

No. Only designated contractors are eligible for compensation in the Python Elimination Program. 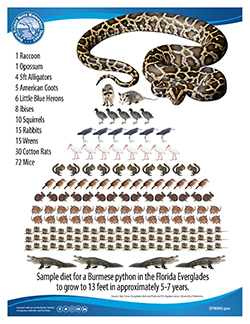 The non-native Burmese python was likely introduced to Florida's Everglades by accidental or intentional releases by pet owners. Once sought-after commodities, pythons have been sold by breeders as pets or showpieces to exotic animal collectors. Since making their way into the bountiful grounds of the Everglades, these giant constrictors have thrived, assuming a top position on the food web.

While researchers have been hard pressed to provide specific population numbers in the Everglades, there have been a rapid number of increased sightings. The species was once relegated to only Everglades National Park and Miami-Dade County, but recent tracking shows pythons are moving westward into locations such as Big Cypress National Preserve and northward into Broward and Palm Beach counties.

Burmese pythons possess an insatiable appetite. They can not only kill Florida native prey species and pose a threat to humans, but also rob panthers, birds of prey, alligators and bobcats of a primary food source.

A 2015 study by the United States Geological Survey, Florida Fish and Wildlife Conservation Commission and the University of Florida researched invasive pythons' impact on indigenous food sources. Researchers released 95 adult marsh rabbits in areas of the Everglades known to harbor pythons. Within 11 months of the release, the study showed that pythons accounted for 77 percent of rabbit deaths, reducing prey for native predators. 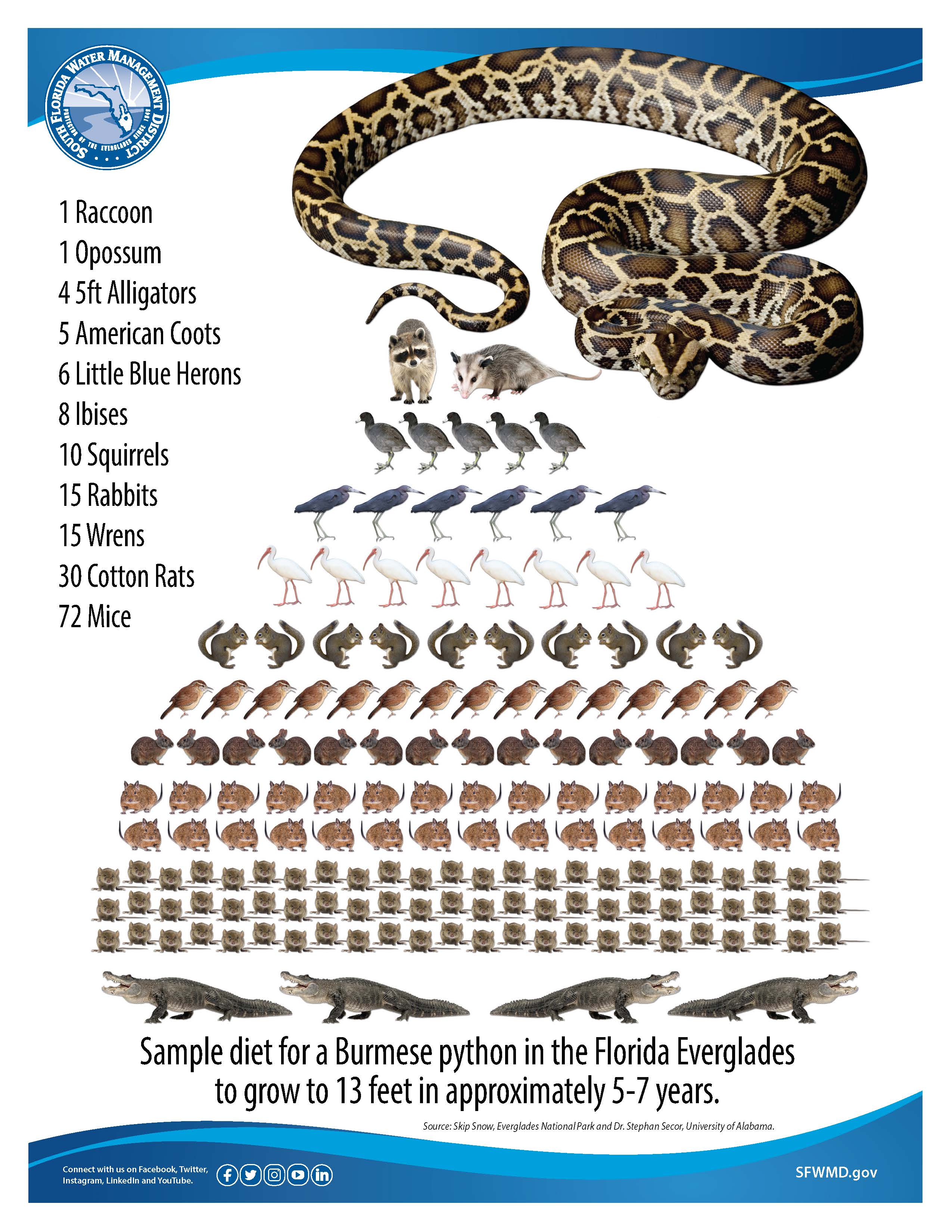