Skip to main content
80 pythons submitted during the 2020 Python Bowl! 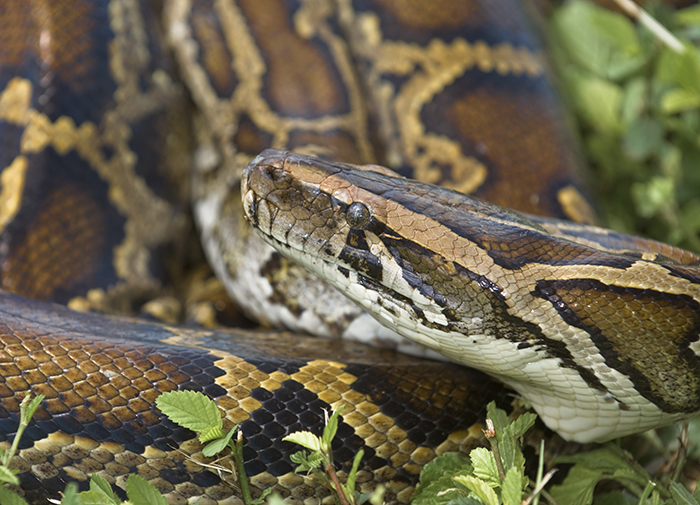 Participants in the Florida Python Challenge™ 2020 Python Bowl removed 80 invasive Burmese pythons from the Everglades while simultaneously helping to raise awareness about this important conservation issue. Today the Florida Fish and Wildlife Conservation Commission (FWC) and the South Florida Water Management District announced the results and winners of the Python Removal Competition at the 2020 Python Bowl award ceremony at the Super Bowl Live event in Miami.

More than 750 people from 20 states registered to take part in the 10-day competition to remove Burmese pythons, which are decimating native wildlife populations in the Everglades. Everyone who registered passed a mandatory online training. Another 550 people took part in hands-on, optional safe-capture trainings that taught them how to identify, locate, and safely and humanely capture Burmese pythons.

“The Miami Super Bowl Host Committee is very proud to have worked with these partners to bring attention to the threat that invasive species pose to The Everglades,” said Rodney Barreto, Chairman of the Miami Super Bowl Host Committee. “There are many men and women who work diligently every day to combat the harmful impacts of nonnative species and it is imperative that we are all educated on the effects of the Burmese pythons to our native wildlife.”

“Having more than 550 people come out to take part in optional in-person trainings is a testament to the public’s commitment to helping conserve Florida’s precious natural resources,” said FWC Executive Director Eric Sutton. “Public support is critical as is the strong leadership of Gov. DeSantis and the support of our partners and sponsors including the South Florida Water Management District, the Miami Super Bowl Host Committee, the University of Florida, Bass Pro Shops and the Bergeron Everglades Museum and Wildlife Foundation.”

“More than 750 registrants joined Florida’s ramped-up efforts to remove harmful pythons from America’s Everglades as part of the Florida Python Challenge™ 2020 Python Bowl,” said South Florida Water Management District Executive Director Drew Bartlett. “The national and international attention around Super Bowl LIV brought incredible public awareness to the danger invasive Burmese pythons pose and the importance of Everglades restoration. Congratulations to all the winners, and a big thank you to Gov. DeSantis, the Florida Fish and Wildlife Conservation Commission, the Miami Super Bowl Host Committee and everyone who participated in this important conservation effort.”

In addition to the Python Challenge™, there are several ways the general public can continue to help control nonnative species such as Burmese pythons. Anyone can hunt pythons any time on private lands with landowner permission and on 22 public lands throughout south Florida. People can also take part in ongoing Python Patrol trainings to learn more about how to identify and capture Burmese pythons in the wild.  Learn more at MyFWC.com/Python.

The public can also help control invasive species by reporting nonnative fish and wildlife to the FWC’s Invasive Species Hotline at 888-IVE-GOT1 (888-483-4681), by reporting sightings online at IveGot1.org or by downloading the IveGot1 smartphone app.

Photos and video available at: FLPythonChallenge.org