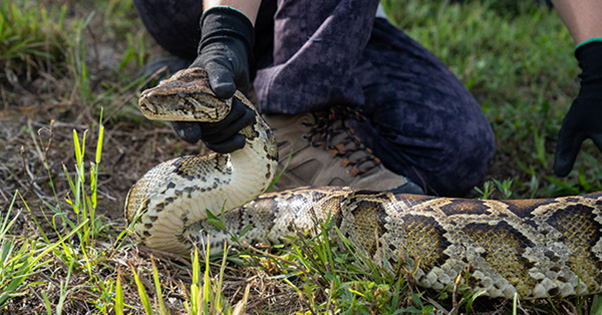 A record-breaking 231 invasive Burmese pythons were removed from the Greater Everglades Ecosystem during the 2022 Florida Python Challenge®, marking the largest number of destructive snakes ever captured as part of the annual competition.

Did you know invasive pythons are one of the most harmful invasive species in the Everglades, preying upon native birds, mammals and even alligators? Safely capturing and eliminating these destructive snakes protects native wildlife and our one-of-a-kind Everglades ecosystem.

The 2022 Florida Python Challenge® took place in August and allowed both professional and novice participants the opportunity to join in the effort to remove pythons from public lands in South Florida. The competition and conservation effort is a partnership between the Florida Fish and Wildlife Conservation Commission (FWC) and the South Florida Water Management District (SFWMD) that raises awareness about invasive species and their impacts on our environment.

Highlights from the 2022 Florida Python Challenge® include:

Since 2017, the state has taken unprecedented action to remove pythons in Florida and raise awareness about the damage they cause. More than 10,000 pythons have been removed since the SFWMD and FWC teamed up to combat harmful pythons and eliminate them from South Florida.

The success of this year’s python challenge highlights the agencies’ strong partnership and continued commitment to combating invasive pythons.

Learn more about the Florida Python Challenge and the importance of removing as many pythons as possible from across the landscape.