A water reservation is a legal mechanism, authorized by Section 373.223(4), Florida Statutes, to set aside water from consumptive uses for the protection of fish and wildlife or public health and safety. When a water reservation rule is in place, the volume and timing of water at specific locations is protected for the natural system. The District uses water reservations to meet federal requirements for the protection of water identified for the natural system as part of Comprehensive Everglades Restoration Plan (CERP) projects.

A water reservation rule is developed following a series of public workshops held for receiving stakeholder input. The Priority Water Body List and Schedule is submitted annually to the Florida Department of Environmental Protection, which outlines ongoing or new rulemaking initiatives for future reservations. Once a rule is adopted, it is then implemented through the District's consumptive use permitting and water supply planning programs.

On this page you will find extensive information about the water reservation rule development process and associated rules, documents, peer review, and presentations from public workshops.

To view the final and adopted water reservation rules for the following water bodies, click HERE.

Kissimmee River and Chain of Lakes

Maintaining the availability of water is a key component of environmental restoration and management of the Kissimmee River and Chain of Lakes. The Kissimmee River and Chain of Lakes form the headwaters of Lake Okeechobee and the Everglades. Together, these remarkable Central Florida water resources shelter 178 species of fish, wetland-dependent wading birds, amphibians, reptiles, and mammals. The basin contains a nationally recognized largemouth bass (Micropterus salmoides) fishery, nesting colonies of the endangered wood stork (Mycteria americana) and snail kite (Rostrhamus sociabilis), and one of the largest concentrations of nesting bald eagles (Haliaeetus leucocephalus) in the United States. Before the Kissimmee River was channelized, it meandered for 103 miles between Lake Kissimmee and Lake Okeechobee and contained diverse fish and wildlife resources and habitats associated with sand bars, vegetation beds, and variable flow conditions. The river overflowed its banks frequently and inundated the 1 to 2 mile-wide floodplain for extended periods of time, creating a mosaic of wetland plant communities.

The water reservations also supports the Kissimmee River Restoration Project (KRRP) completed through a 50-50 partnership between the District and the U.S. Army Corps of Engineers to return flow to the meandering river's historic channel. The project includes restoration of more than 40 square miles of river-floodplain ecosystem containing approximately 25,000 acres of wetlands and 44 miles of historic river channel.

To protect fish and wildlife in the Central Everglades, defined as Water Conservation Area 3 and Everglades National Park, the District adopted a prospective water reservation rule for the EAA Reservoir in 2021. When constructed and operational, the 240,000 ac-ft reservoir will reduce damaging discharges from Lake Okeechobee to the coastal estuaries and improve the timing, distribution, and deliveries of water needed for fish and wildlife. These capital improvements will support the MFL recovery strategy for the Everglades to restore more natural water movement within the greater Everglades ecosystem.

The Comprehensive Everglades Restoration Plan (CERP) identifies restoration of the Caloosahatchee Estuary as an integral step in achieving systemwide benefits in the south Florida ecosystem. Promoting a balanced and healthy salinity regime in the Caloosahatchee Estuary is essential for maintaining the ecological integrity and associated economic benefits of this unique habitat on Florida's southwest coast. The Caloosahatchee River (C‑43) West Basin Storage Reservoir is a 170,000 acre-foot above ground reservoir called for as part of CERP to moderate flows to the estuary and help to achieve a more balanced salinity regime there. Through capture and release of water, the reservoir will serve to reduce the amount of freshwater flows to the estuary from basin runoff and discharges from Lake Okeechobee during wet periods, and also help to maintain a desirable minimum flow of fresh water to the estuary during dry periods. The District developed a water reservation rule that identifies and reserves from consumptive use all water contained within and released via operation of the Caloosahatchee River (C‑43) west Basin Storage Reservoir. The water reservation was adopted by the Governing Board on May 15, 2014, and it became effective on July 16, 2014 (Rule 40E‑10.041, Florida Administrative Code). 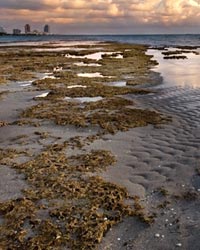 The State of Florida and the South Florida Water Management District have invested significantly in the Comprehensive Everglades Restoration Plan (CERP), a framework for restoring, protecting and preserving the water resources of central and southern Florida. Biscayne Bay and its coastal wetlands are part of this plan. The CERP Biscayne Bay Coastal Wetlands Project – Phase 1 will improve distribution of freshwater flows to southern Biscayne Bay, including Biscayne National Park. The CERP project will result in healthier coastal wetlands and a more natural overland flow of water that will mimic historical conditions. It will also help re-establish critical low-salinity habitat that is essential for a variety of estuarine plants and animals such as seagrasses, eastern oysters, blue crabs and spotted sea trout. The District developed a water reservation rule for Nearshore Central Biscayne Bay that identifies and reserves from consumptive use the water needed for the CERP project. The rulemaking effort incorporated more than a year and a half of work by agency staff, as well as input from stakeholders at a series of public workshops and meetings. The water reservation was adopted by the Governing Board on June 13, 2013, and it became effective on July 21, 2013 (Rule 40E‑10.061, Florida Administrative Code).

Key elements of the Comprehensive Everglades Restoration Plan (CERP) Indian River Lagoon – South Project are reducing high-volume discharges of fresh water to the St. Lucie Estuary, providing a more natural quantity, quality, timing and distribution of inflows to the estuary, and restoring the North Fork of the St. Lucie River and its floodplain. The South Florida Water Management District, State of Florida and the United States government have provided substantial support for restoration of these ecosystems as part of CERP. The St. Lucie Estuary and Indian River Lagoon together are home to more than 50 endangered or threatened species, making it the most diverse estuarine environment in North America. The lagoon supports multimillion-dollar fishing, tourism, agricultural and recreational industries Extreme salinity variations and ever-increasing inflows have contributed to major changes in the natural communities of the estuary, as seen by seagrass and oyster losses. Restoring a more natural volume, timing and distribution of flows to the river and estuary will give its native plant and animal life a better opportunity for recovery. The District developed and adopted a water reservation rule for the North Fork of the St. Lucie River that identifies and reserves from consumptive use the water needed for the CERP project. The water reservation ensures that the St. Lucie River as well as the estuary and southern Indian River Lagoon fully benefit from CERP. The water reservation was adopted by the Governing Board on Sept. 10, 2009, and it became effective on March 18, 2010 (Rule 40E‑10.051, Florida Administrative Code).