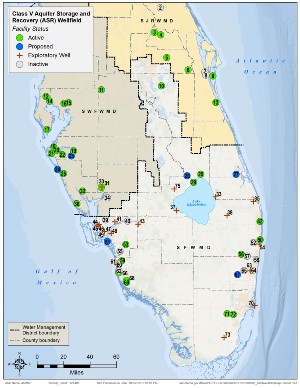 Aquifer Storage and Recovery (ASR) refers to the process of recharge, storage, and recovery of water in an aquifer. ASR facilities have been used in Florida and throughout the United States for about 40 years. Currently, there are over thirty ASR systems operating throughout the state, utilizing approximately 100 wells for recharge, storage, and recovery. A map of ASR facilities in Florida is shown to the right. ASR systems are currently used for the storage of potable drinking water, partially treated surface water, groundwater, and reclaimed water.

Surface water is collected during times when water is plentiful (typically during the wet season in Florida), treated to meet applicable water standards, and then pumped into an aquifer through a well. Water can be stored and subsequently recovered and distributed for purposes such as water supply or ecosystem restoration. Most ASR facilities in Florida store water in the upper Floridan Aquifer, primarily in areas where the aquifer is brackish or somewhat salty.

The process of recharge, storage, and recovery is called a cycle. Typically, ASR is implemented on an annual cycle in which recharge of excess wet season flows are stored, then recovered for distribution during the dry season. ASR technology offers the potential to store large quantities of water without the need for expansive tracts of lands that would be required for aboveground storage facilities. An ASR system can also provide large volumes of water over long periods of time, increasing water supplies during seasonal and multi-year droughts.

An introduction to ASR technology can be found at the following link (video): 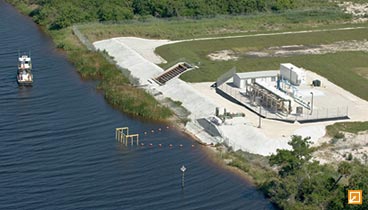 A copy of the meeting's agenda can be found below:

A link to the meeting's presentation can be found below:

A link to a recording of the meeting can be found below:

The Comprehensive Everglades Restoration Plan (CERP), authorized by Congress in 2000, provided a framework to “restore, preserve, and protect the south Florida ecosystem while providing for other water-related needs of the region, including water supply and flood protection.” Successful implementation of the CERP requires finding ways to store water to improve the quantity, quality, timing, and distribution of flows to the Everglades ecosystem. One of the primary storage technologies proposed in the CERP is ASR. However, implementing CERP ASR required that many uncertainties be resolved prior to expansion of the technology. The CERP ASR Pilot Projects were initiated to resolve technical uncertainties prior to full ASR implementation envisioned in CERP.

As part of the CERP, the District and the U.S. Army Corps of Engineers investigated the use of ASR for water storage to benefit the Everglades and other natural systems in South Florida. The jointly developed ASR Regional Study documents the results of more than a decade's worth of scientific and engineering investigations and serves as a technical guide when considering ASR as part of future Everglades restoration efforts.

The study incorporated results from two pilot ASR projects successfully constructed and tested along the Kissimmee River and the Hillsboro Canal. The study also included results from numerous regional investigations conducted by a multi-agency, multi-disciplinary team of scientists and engineers to address technical uncertainties.  The essential findings of the study indicated that a reduced number of wells could be implemented safely throughout south Florida, and that there were no fatal flaws identified that would prevent the implementation of the technology for regional ecosystem benefits.

The National Research Council (NRC) released a peer review of the draft study in April 2015, concluding that it "significantly advances understanding of large-scale implementation of ASR in South Florida." An incremental adaptive restoration approach for ASR may involve one or more clusters of five ASR wells to address critical uncertainties such as recovery efficiencies, performance, long-term water quality and ecological effects.

Although ASR technology has been used successfully in Florida since 1983, concerns have been raised about the large-scale application of ASR as envisioned in the CERP. In 2015, the National Research Council reviewed the ASR Regional Study Technical Data Report and prepared a report of their findings. The report concluded that CERP ASR should move forward in a phased implementation, while continuing to address some remaining uncertainties.

To address those uncertainties, the District and United States Army Corps of Engineers developed the 2021 ASR Science Plan, which describes potential studies to be conducted as ASR wells are implemented in a phased manner. Developed with input from an independent peer-review panel of scientists, the 2021 ASR Science Plan presents an overarching program of scientific studies that will support a phased ASR implementation schedule for the Lake Okeechobee Watershed Restoration Project (LOWRP). Although the proposed studies are intended to be conducted at ASR locations identified in the LOWRP Integrated Project Implementation Report and Environmental Impact Statement, they may have application beyond LOWRP’s scope. The ASR Science Plan is anticipated to be updated annually.