In Florida, most of the fresh water we use comes from underground aquifers. Aquifers are composed of multiple layers of porous rock, such as limestone or sandstone, that hold water. Cities and towns, businesses and agriculture draw much of their water supplies from these aquifers. Supplying approximately 90 percent of the state's drinking water, Florida's aquifers supply more than 8 billion gallons of water each day; they are among the most productive in the world.

In South Florida, aquifers vary in depth, composition and location. Our three primary aquifer systems are the Surficial Aquifer System, the Intermediate Aquifer System and the Floridan Aquifer System.

The Surficial Aquifer System is widespread and shallow, ranging from approximately 100 to 300 feet underground. It is separated from the Floridan Aquifer System by a confining bed of soil. Surficial aquifers provide most of the public freshwater supply southwest of Lake Okeechobee and along the Atlantic coast in St. Lucie, Martin, Palm Beach, Broward and Miami-Dade counties.

Surficial aquifers are recharged primarily by rainfall, but water also comes in from surface water bodies, such as lakes and streams, as well as from groundwater flow from outside the region or from deeper aquifers. Groundwater levels in surficial aquifers can change rapidly in response to drought or rainfall, as well as from withdrawals by pumping.

Covering more than 4,000 square miles in southeastern Florida, the Biscayne aquifer is a surficial aquifer. It is the most intensely used water source in Florida, supplying water to Miami-Dade, Broward and southern Palm Beach counties, one of the most densely populated areas in the state with more than 5 million residents.

In southwestern Florida, aquifers that lie between the Surficial Aquifer System and the Floridan Aquifer System are collectively referred to as the Intermediate Aquifer System. This aquifer system starts in Hillsborough and Polk counties and extends south through Lee and Collier counties. The Intermediate Aquifer System is under confined conditions and is mainly comprised of permeable layers of sand, shell and limestone separated by clay confining units. It is the main source of water supply for Sarasota, Charlotte and Lee counties where the underlying Floridan aquifer contains brackish water.

The Floridan Aquifer System is the portion of a principal artesian aquifer that extends across several states. The principal artesian aquifer is the largest, oldest and deepest aquifer in the southeastern U.S. Ranging across 100,000 square miles, it underlies all of Florida and parts of southern Alabama, southeastern Georgia and southern South Carolina. The Floridan Aquifer System is the main source of groundwater in the Kissimmee Basin.

Instead of snowcapped mountains that store water in advance of warmer temperatures, most of our drinking water comes from underground "mountains" of porous materials called aquifers which are replenished by rain. The Biscayne Aquifer is South Florida's lower east coast's primary source of fresh water. Deeper down is the Floridan Aquifer, separated by a confining layer of dense rock. The Floridan Aquifer spans the state and is usually too salty to drink without further treatment.

NOTE: The water control structures pictured below are representative of the many types of structures used by regional, secondary and local surface water management systems to hold and move water. These interconnected surface water systems store excess rainfall to prevent flooding and recharge aquifers, as well as to prevent saltwater intrusion. Illustration is not to scale.

Models are one of many tools used by hydrogeologists and water managers to help monitor and evaluate groundwater aquifer systems. Groundwater models take into account the basic components of the hydrological cycle along with the physical properties of the aquifer and the stresses to the system, rainfall, pumping rates, etc. Groundwater flow systems can also be influenced by surface water bodies, such as wetlands. In wetland areas, physical features such as levees, sloughs and canals can influence the groundwater and surface water interactions and flow. 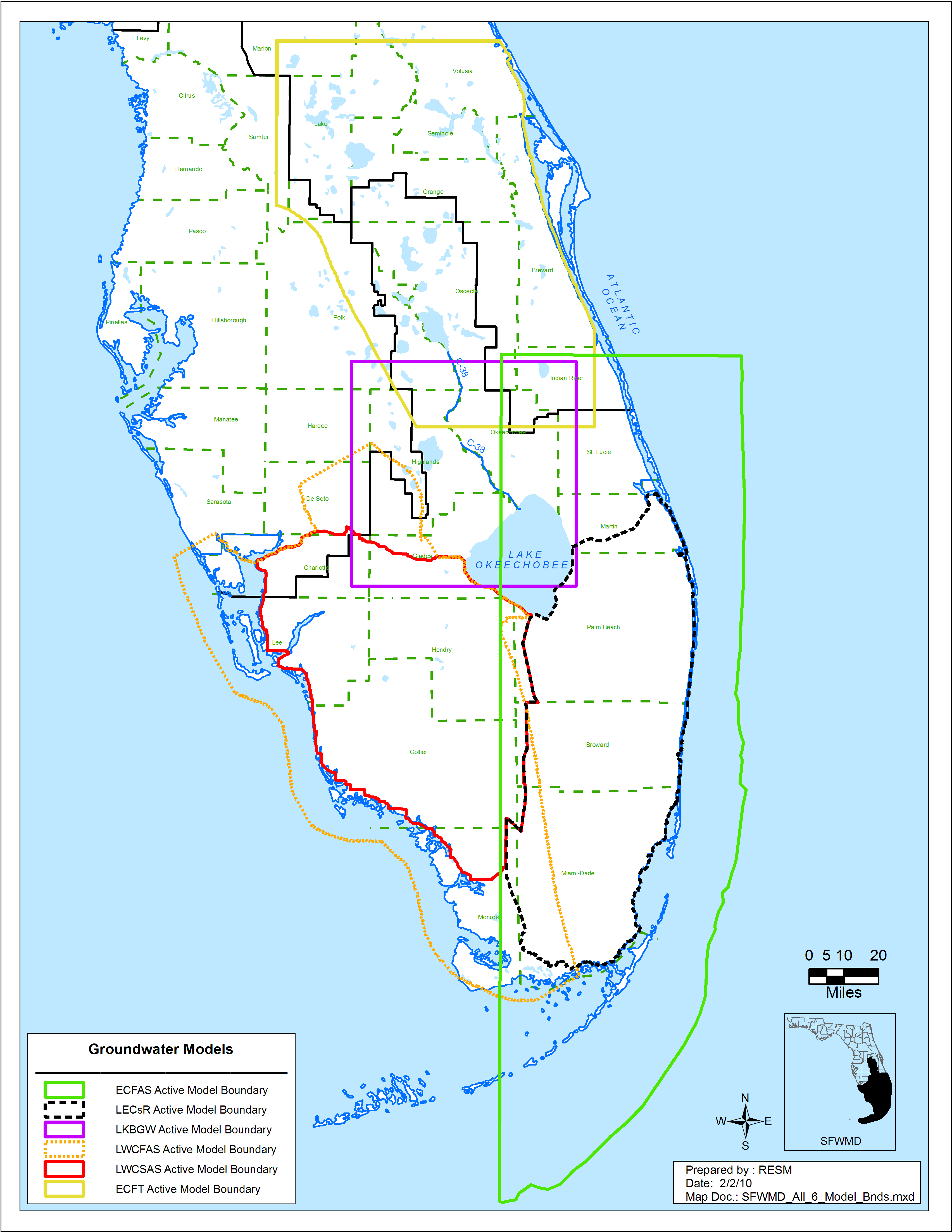 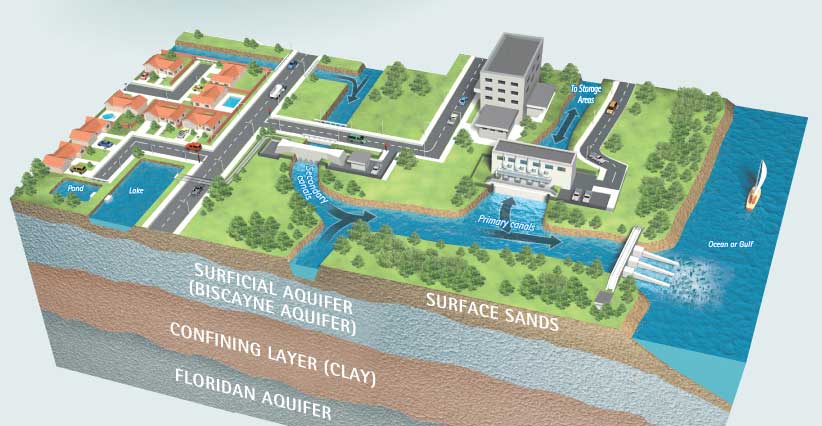