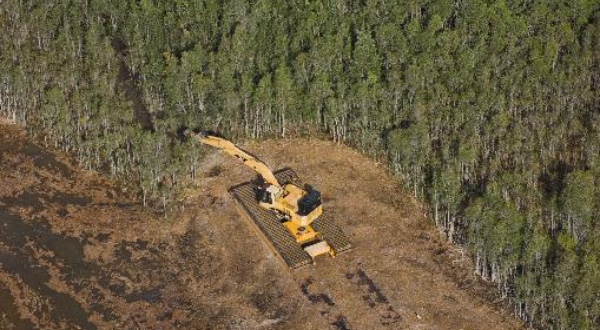 Did you know that the South Florida Water Management District (SFWMD) has one of the nation's largest invasive plant management programs? SFWMD battles over 80 species of non-native, invasive plants including Brazilian pepper, and floating and submerged aquatic vegetation such as hydrilla and water hyacinth.

Today we’re going to zero in on efforts to control Melaleuca. Melaleuca trees are one of South Florida’s most invasive species next to Old World climbing fern and the Burmese python. Successfully combating these invasive species is critically important to the SFWMD’s strategic goals of advancing Everglades restoration and improving water quality.

Melaleuca was introduced to Florida over a century ago as an ornamental tree, but very quickly started transforming wetlands and displacing native cypress and sawgrass in the Everglades. SFWMD was instrumental in leading the charge to get Melaleuca federally listed as a noxious weed, a crucial step toward securing support from federal agencies, such as the U.S. Army Corps of Engineers and state agencies such as the Florida Fish and Wildlife Conservation Commission, to curb its spread.

SFWMD and its partners use a mix of approaches for melaleuca control. This is known as “integrated pest management," and can include the following methods:

The use of this integrated pest management approach provides better results than any one method could achieve on its own. For over 30 years, SFWMD’s melaleuca management program has systemically cleared invasive melaleuca from Lake Okeechobee and the Everglades, and land managers are able to maintain these areas with very low melaleuca presence year after year.

The success of this program is largely attributed to sustained funding, close interagency coordination and a lot of dedication -- all of which contribute to the sharing of new information and technology, improved regional strategic planning, and increased public awareness to maintain and protect our public lands.