DYK: Preparing Our Communities for Significant Rainfall from Hurricane Ian 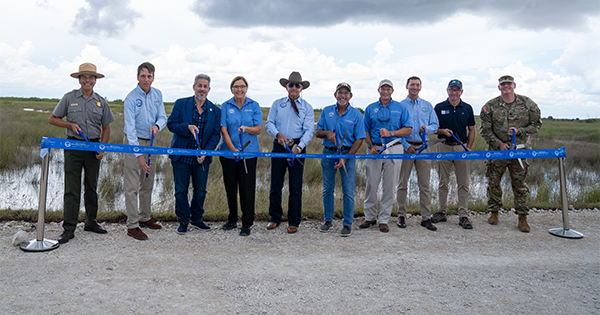 “For many years, we have been working to find a solution to prevent water from seeping away from Everglades National Park and mitigate the residential flooding issues in the area. The South Florida Water Management District Governing Board decided that it was time to solve this problem, researched a solution, and now we are celebrating this accomplishment that benefits everybody,” said South Florida Water Management District Governing Board Member Charlie Martinez. “Our success to continue completing restoration and infrastructure projects would not be possible without the leadership of Governor DeSantis and the record investments made by the Florida Legislature. We appreciate our partners at the U.S. Army Corps of Engineers – Jacksonville District, Miami-Dade County, and the Florida Department of Environmental Protection who helped bring this important project to the finish line. And we greatly appreciate the steadfast advocates who have been committed to doing all we can to restore the Everglades.”

This critical project supports restoration flows of water south through the Greater Everglades Ecosystem and allows the Everglades to further reap the benefits of new operational plans like the Combined Operational Plan (COP) and new infrastructure being put in place throughout the Everglades.

The project is already demonstrating success for Everglades restoration. During recent heavy rain events, more water remained in Everglades National Park and flooding in the nearby community was reduced.

The South Florida Water Management District Governing Board recently authorized an additional phase of the project to build on this success and provide additional restoration and flood mitigation benefits. The next phase will install approximately 4.9 miles of a new seepage wall along the L-357 West Levee. It will break ground later this year.