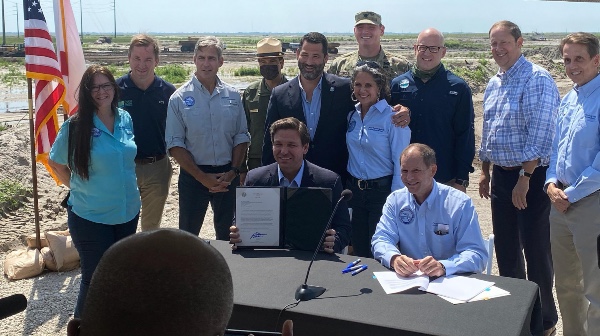 The South Florida Water Management District Governing Board unanimously approved an agreement with the U.S. Army Corps of Engineers this morning that keeps the Corps on track to begin federal construction on the reservoir component this year. In April 2020, Governor DeSantis announced that the South Florida Water Management District began construction on the State of Florida’s component of the project, the stormwater treatment area, 12 months ahead of schedule.

“Today marks a critical milestone for Everglades restoration and achieving our state’s long-term environmental goals,” said Governor DeSantis. “When I took office, I made expediting the EAA Reservoir Project a top priority. Signing this agreement means we are another step closer to moving more clean water south through the Everglades and reducing harmful discharges from Lake Okeechobee into the Caloosahatchee and St. Lucie estuaries.”

“Under the leadership of Governor DeSantis, DEP and the South Florida Water Management District have expedited the state’s portion of the EAA Reservoir project, beginning construction 12 months ahead of schedule,” said DEP Secretary Noah Valenstein. “The signing of the Project Partnership Agreement today is an important step that will enable the Corps to initiate construction of the federal portion of this project. I challenge the Corps to match the state’s momentum and sense of urgency on this critical project that will significantly reduce harmful discharges to the northern estuaries and send more water south for the benefit of the Everglades ecosystem and the people of Florida.”

“Three short years ago, the oddsmakers would have been betting heavily against us standing here today. Moving forward on the construction of the EAA reservoir has been an uphill battle. But we are here today, and we are moving forward with the U.S. Army Corps of Engineers,” said Chauncey Goss, Chairman of the South Florida Water Management District’s Governing Board. “This is simply a testament to how government can work for the people when strong leaders engage. Governor DeSantis has kept his eyes firmly on the prize and has never wavered in his support of this project, even when it was politically expedient to throw in the towel. Because of his leadership, along with support from the Florida Legislature, and dedication of the SFWMD Governing Board ​and staff, we are moving full steam ahead to complete the EAA Reservoir Project. Today’s agreement is critical to restoring the health of our estuaries and the Everglades, and we look forward to the U.S. Army Corps breaking ground on their portion of the EAA Reservoir Project as soon as possible.”

“The EAA Reservoir is the indispensable component to stop the Lake Okeechobee discharges once and for all,” said Joe Negron, Former President of the Florida Senate. “Early on Governor DeSantis promised the citizens of Florida that he would build this Reservoir.  He kept his word and never wavered.  That is why we are here this morning — victorious.”

“We are here because of the leadership of Governor Ron DeSantis and the Florida Legislature, who listened to the people of Florida and put completion of this critical reservoir on a fast track,” said Eric Eikenberg, CEO of The Everglades Foundation. “It would not have happened without the tenacious determination of former Senate President Joe Negron, who was steadfast in making this project a reality. Thanks to their persistence, we begin construction a full year ahead of schedule. Completion of the EAA Reservoir, together with others already under construction, will reduce algae-causing discharges from Lake Okeechobee by more than half and provide a source of life-giving fresh clean water to America’s Everglades and Florida Bay.”

“The EAA Reservoir is a cornerstone project that will help keep Everglades National Park wetlands and Florida Bay supplied with fresh, clean water, especially during the drier months when we need it,” said Pedro Ramos, Superintendent of Everglades and Dry Tortugas National Parks. “This is an important step forward and the greatest gift for the Everglades on this Earth Day.”

“Audubon applauds the Governing Board and the Army Corps for expeditiously reaching an agreement to move the EAA Reservoir Project forward,” said Beth Alvi, Policy Director for Audubon Florida. “We thank Governor DeSantis for his continued commitment to Everglades restoration. The EAA Reservoir Project will benefit Florida’s environment and economy reducing harmful discharges to the estuaries east and west, sending clean water south to the Everglades.”

“The EAA Reservoir project is critical to restoring the Everglades and protecting our lagoons and estuaries,” said Lisa Interlandi, Executive Director of the Everglades Law Center. “This project has been a long time coming and it's great to see the State of Florida and the South Florida Water Management District moving forward at full speed to implement it.”

“The signing of this agreement is an important event as we continue the journey to restore the Everglades with our state partners,” said Col. Andrew Kelly, Commander of the U.S. Army Corps of Engineers Jacksonville District.

"It’s great to see the South Florida Water Management District under the leadership of Governor DeSantis, making progress on Everglades Restoration,” said Capt. Daniel Andrews, Executive Director of Captains For Clean Water. “Clean and usable waterways are the backbone of Florida’s economy, and the EAA Reservoir Project is such a critical part of restoring balance back to our estuaries. This agreement will allow progress to continue and things to stay moving in the right direction. Projects like this are massive undertakings, and it’s imperative that they stay on track if we’re going to save our waters. We’re glad to see this agreement to stay on track here today.”

“The EAA Reservoir is a central piece of Everglades restoration and vitally important for reducing damaging discharges that harm the environment and our coastal communities, while simultaneously storing, treating, and sending water south to the Everglades,” said Rob Moher, President & CEO of Conservancy of Southwest Florida. “We greatly appreciate the Governor and Governing Board continuing to make this project a top priority, and applaud the signing of the Project Partnership Agreement between the South Florida Water Management District and the U.S. Army Corps of Engineers.”

“This is a great day for the Everglades and northern estuaries,” said James Evans, Environmental Policy Director for the Sanibel-Captiva Conservation Foundation. “Thanks to the leadership of Governor DeSantis and the Governing Board, we are moving forward at a swift pace with the keystone project of Everglades restoration, a project that will reduce the damaging discharges to the Caloosahatchee and St. Lucie estuaries and restore freshwater flows to the Everglades and Florida Bay.”

“We are elated at the progress made by the South Florida Water Management District under the leadership of Governor DeSantis with the signing of the agreement to begin construction of EAA reservoir,” said Emma Haydocy, Executive Director of Florida Bay Forever. “The reservoir is the single restoration project that will most directly and positively impact Florida Bay and bring clean water south where it is needed most. Today is a great day for Florida Bay and the entire Florida Keys community.”

"With this agreement, construction of the EAA Reservoir by the Army Corps of Engineers can begin in earnest" said Jim McDuffie, President and CEO of Bonefish & Tarpon Trust. "Never has a project been so important to Everglades restoration. We thank Governor Ron DeSantis for his leadership and steadfast commitment and SFWMD for sustaining the momentum. Every hurdle, including some that would have delayed the project's start, has been cleared and much needed action expedited."

The EAA Reservoir Project is one of the most important Everglades restoration projects for reducing harmful discharges to the northern estuaries and sending more clean water south to the Everglades. Governor DeSantis expedited this critical Everglades project on his second day in office with the signing of Executive Order 19-12. Since taking office, Governor DeSantis also secured record Everglades restoration funding to support this and other key projects and signed important environmental legislation into law, including the Clean Waterways Act.

The EAA Reservoir Project is a joint Everglades restoration project between the South Florida Water Management District and the U.S. Army Corps of Engineers. Under the leadership of Governor DeSantis, Florida continues to take the lead in Everglades restoration. The South Florida Water Management District began building the water-cleansing marsh called a Stormwater Treatment Area last year, and today’s agreement enables the U.S. Army Corps of Engineers to build the accompanying storage reservoir. The EAA Reservoir Project will benefit both Florida’s environment and economy. In addition to more clean water for the Everglades, the project is creating jobs and providing a significant boost to the nearby local economies south of Lake Okeechobee.