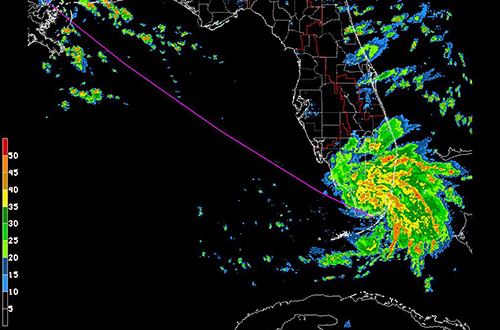 West Palm Beach, FL – The South Florida Water Management District (SFWMD) has been working around the clock for months to lower water levels in the water conservation areas to create capacity for sending additional Lake Okeechobee water south, all in an effort to alleviate South Florida's high water emergency caused by record May rainfall and recent storms such as Tropical Storm Gordon.

SFWMD Chief Engineer John Mitnik today gave the Water Resources Analysis Coalition an update on current water conditions and efforts to move water that can be seen as part of SFWMD's weekly video series. The video series was established to inform the public on current water conditions and the agency's actions amid the high water emergency. The video update can be seen by clicking HERE or visiting the District's website dedicated to the emergency situation at www.sfwmd.gov/managinghighwater.

In the video, Mitnik discussed current water conditions including rainfall for the month of August, which was about 21 percent, or 1.71 inches, below average. Mitnik also told the coalition how Tropical Storm Gordon dropped an average of 1.26 inches of rainfall across South Florida, with some areas in South Miami-Dade County, such as Homestead, receiving as much as 5 inches of rain.

The District coordinated with local drainage districts to help them prepare their systems for the storm. SFWMD also lowered canal levels in its regional flood control system in order to take stormwater from these local drainage districts and municipalities to protect families and properties from flooding. With several more weeks of the wet season and hurricane season, SFWMD will take similar steps to prepare the system for future storms.

Flood control in South Florida is a shared responsibility between the District, which operates the regional flood control system, and local drainage districts, municipalities and homeowners associations that operate the secondary and tertiary drainage systems that move flood waters away from homes and neighborhoods. Residents throughout South Florida can find what local agency to contact about flooding concerns based on their address by visiting the District's Flood Control website at www.sfwmd.gov/floodcontrol. Residents can also watch an educational video about how the shared flood control system works by clicking HERE.