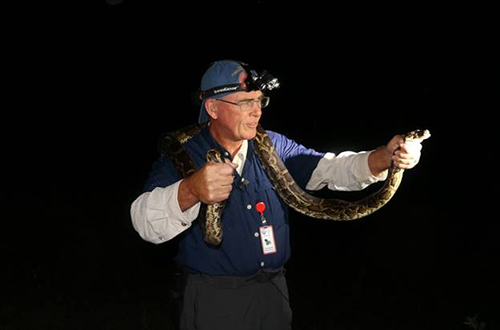 NOTE: This media advisory was issued by the office of Congressman Francis Rooney.

Congressman Rooney stated, “My reason for hunting invasive Burmese pythons in the Everglades was to bring national attention to the damage caused by these devastating predators, which prey on native wildlife across South Florida. We all have a vested interest in restoring and protecting the Everglades and these invasive species are a serious problem.”

Rooney continued, “After last night, there are five less invasive pythons alive to menace the Everglades ecosystem. Killing off these pythons is important, but is only part of the solution to the ecosystem’s plight. I am working every day, all the time, to increase funding for the Comprehensive Everglades Restoration Plan (CERP) and will continue to raise awareness every way possible, including hunting pythons, about the Everglades, our state and national environmental treasure.”

Dan O’Keefe, SFWMD Governing Board Chairman, welcomed the Congressman to the program, “Joining this hunt is a worthy challenge. Having also experienced the program firsthand by participating in a live hunt, I cannot say enough about the tremendous work of our bounty hunters working long hours and enduring the harsh summer elements to rid the Everglades of this destructive python threat. “

"Eliminating one snake from the Everglades is much more than a single kill.” O’Keefe explained, “It's the prevention of 40 to 50 more snakes by destroying a large female carrying 40 to 50 eggs; and, it's the countless number of native Florida animals spared from the jaws of these killing-machines."