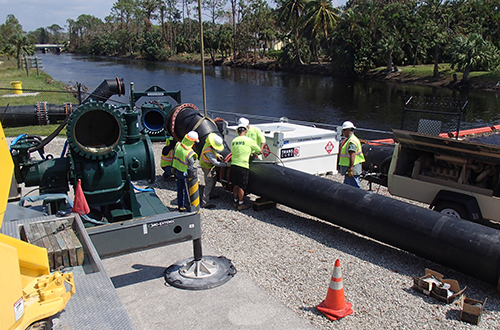 Note: This commentary was featured in the Oct. 24, 2017, edition of Naples Daily News.

By Rick Barber, Big Cypress Basin Board Chairman and SFWMD Governing Board Member

During the past four and a half months, Florida’s west coast has been inundated by 5.5 feet of rain. That is almost a foot more than the basin typically receives in an entire year.

Knowing full well that each year the beauty of our west coast lifestyle could be tested by the harsh reality of a direct hit from a hurricane, last year the Big Cypress Basin Board increased our Hurricane Emergency Reserve from $750,000 to $2 million. The move proved timely, allowing for immediate water management resource deployment and utilization for the recovery effort from Hurricane Irma.

Since Irma, water levels throughout the Big Cypress Basin system have mostly recovered due to the strategic actions of the South Florida Water Management District.

Before this monstrous storm made landfall in South Florida, district staff members already were working hard to prepare for its impacts. This included aggressive canal cleaning and debris removal throughout the year, as well as drawing canal water levels down before impact.

Following Irma, the district continued its efforts with round-the-clock pumping that moved water as quickly as possible.

I’m proud of the district’s resolve to battle through the most trying of times, and even more appreciative of staff’s effort to assist local and county water managers by installing temporary pumps needed to provide relief for our west coast residents and communities.

Some of the district’s more crucial recovery operations included installing:

Lee County is different than the rest of the west coast drainage system because much of it relies on natural systems to alleviate stormwater from urban areas. Challenges brought by this powerful storm included downed trees in the Imperial River that caused widespread flooding in the city of Bonita Springs.

Going forward, areas like Halfway, Spring and Oak creeks, as well as the Estero, Palm, Caloosahatchee and, of course, Imperial rivers must all be maintained properly to keep water flowing after storms.

Rest assured, the district will continue its effort to meet water-management needs and ensure the future of the west coast paradise that we all call home.