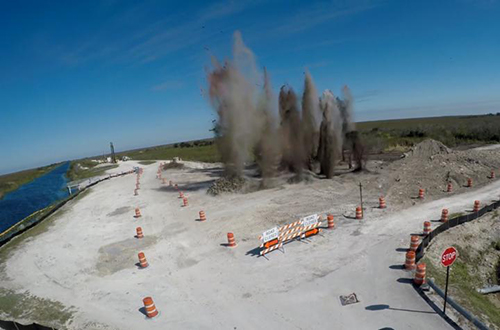 "This is a major first step to moving more water south," said SFWMD Governing Board Chairman Federico Fernandez, after he pushed the button to detonate several underground explosives necessary to expedite excavation and construction for the new S-333N water control structure. "It's been a busy couple weeks here at SFWMD, as this Governing Board has begun work on the Everglades Agricultural Area Storage Reservoir project and now is expediting the building of the S-333N structure to send additional water south to where it is needed most."

The S-333N structure, which is being constructed adjacent to the existing S-333 water control structure along the L-29 Canal in western Miami-Dade County, will double the amount of clean fresh water SFWMD can move out of Water Conservation Area 3A during high water emergencies and into Everglades National Park and Florida Bay.

Crews are expected to perform another controlled underground detonation this year as part of their work on S-333N. The structure will be completed by June 2020.