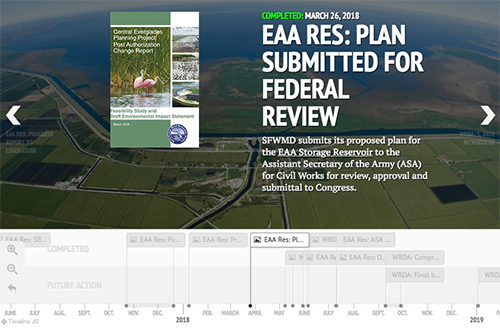 West Palm Beach, FL – The South Florida Water Management District (SFWMD) unveiled a new website to help the public track the status of the Everglades Agricultural Area (EAA) Storage Reservoir Project and how much the state and federal governments have invested in major projects to restore Florida's Everglades.

The Restoration and Cost Sharing tracking website gives the public detailed information on how much the state and federal governments have invested in critical components of the Comprehensive Everglades Restoration Plan (CERP) to restore Florida's Everglades.

SFWMD and the U.S. Army Corps of Engineers have an agreement to share the costs of implementing CERP between the state and federal governments, equally. In total, the state has invested nearly $2.3 billion to finish CERP since 2000 and the federal government has invested about $1.4 billion. Florida has also dedicated recurring funding for the Everglades through the Legacy Florida bill and Senate Bill 10, both signed by Gov. Rick Scott in 2016 and 2017, respectively.

The Restoration and Cost Sharing tracking website also gives the public an in-depth timeline tracking the process for authorization and funding of the proposed EAA Storage Reservoir. When completed, this reservoir would store 240,000 acre-feet of water south of Lake Okeechobee to reduce releases to the coastal estuaries and increase the flow of clean water to the Everglades.