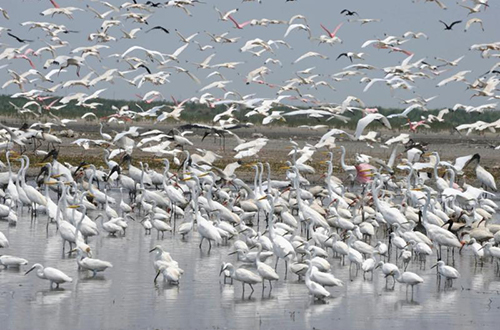 West Palm Beach, FL – The 23rd annual South Florida Wading Bird Report released by the South Florida Water Management District (SFWMD) showed that several key "indicator species" of birds that are critical to gauging the health of the Everglades had an above average breeding season in 2017.

The wood stork, an indicator species, in particular had a banner year, nearly doubling the annual average number of nests over the past decade. The population of wood storks has been climbing for the past several years as SFWMD's work to restore the hydrology and water quality of the Everglades has progressed. Thanks partly to this effort, the wood stork, once listed as a federally endangered species, was upgraded to a federally threatened species by the U.S. Fish and Wildlife Service in 2014.

"One of the primary goals of the Comprehensive Everglades Restoration Plan (CERP) and other ongoing restoration projects is to return the populations of wading birds in the Everglades to healthy numbers by improving the quality, quantity, timing and distribution of water in the system," said SFWMD Lead Environmental Scientist Mark Cook, who helped produce the annual wading bird report. "This report's findings show that with improved habitat and favorable weather conditions, wading birds can feed, breed and flourish."

SFWMD staff, in collaboration with staff from several partner agencies, counted 46,248 new wading bird nests between December 2016 and July 2017. That is more than a 73 percent increase in nesting activity from the 2016 breeding season when a drier than average summer of 2015 followed by unprecedented heavy rainfall during the typically dry season in early 2016 severely hampered nesting and led to one of the worst breeding seasons in the past decade. The 2017 nest count was the second highest yearly count since 2009 and well above the five-year and 10-year averages for new wading bird nests found.