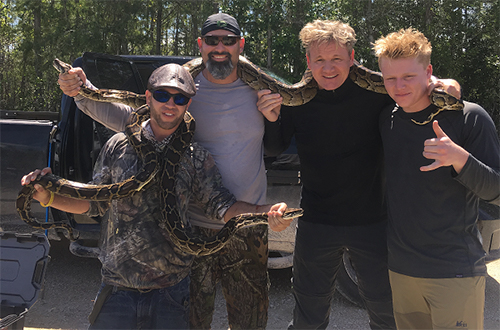 Their kills bring the total number of invasive pythons eliminated by the SFWMD Governing Board's Python Elimination Program to 317 snakes in four months.

Ramsay and his son, Jack, assisted Penniston with all three kills. Ramsay then cooked a python into a special meal right on the levee, using a portable oven. The kills also brought the total number of pythons eliminated by Penniston, of Miami, to almost 30 snakes.

"It was a blast hunting with the Ramsays, and they were very respectful of what we are doing here in the Everglades, fighting these invasive predators to save the ecosystem," said Penniston, who has hunted snakes for years but tasted python for the first time this weekend when he ate Ramsay's cooking. "What an honor to have my first taste of python cooked by Chef Ramsay."