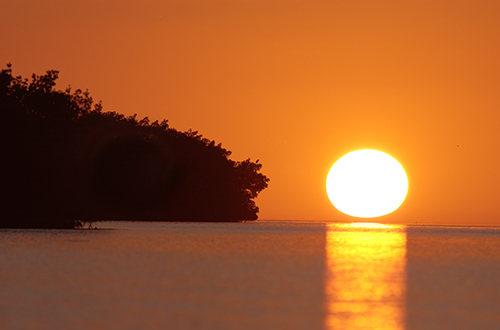 NOTE: This letter to the editor by SFWMD Governing Board member Melanie Peterson was written in response to the Dec. 5 Field & Stream article "Marsh Madness: The Anglers' Proposal to Restore the Everglades."

I recently read your article entitled “Marsh Madness: The Anglers' Proposal to Restore the Everglades.” As an avid angler who frequents Lake Okeechobee, I respect your attempt to give fishermen, and others that depend on water in South Florida, pertinent information on a topic that has surely been on their minds. I have spent four years serving as a Governing Board member to the South Florida Water Management District, an agency committed to restoring the Everglades and reducing those same harmful Lake Okeechobee discharges that have threatened your livelihoods. This means that I have firsthand experience interacting with the best scientists and engineers in the world. These dedicated professionals spend their days quantifying essential data used in every decision that is voted upon by our nine-person Governing Board. Our collective intention is to make a difference in South Florida’s water future. I’m going to highlight some progress made over the years by our District as related to the Everglades Agricultural Area (EAA), Florida Bay and causes of damaging discharges. I believe your audience will find these accomplishments to be of significant importance:

SFWMD Aggressively Meeting Letter of the Law with Everglades Agricultural Area Storage Reservoir Project
In May 2017, Florida Gov. Rick Scott signed legislation (Senate Bill 10) that provides more than $1 billion to increase water storage south of Lake Okeechobee as part of the effort to reduce harmful lake discharges that have robbed the Caloosahatchee and St. Lucie estuaries of the bountiful fish populations you detail throughout your piece. SFWMD’s best-of-the-best are working at a breakneck pace through this holiday season to make the water storage reservoir in the EAA a reality. So far, the results are impressive as they literally cut the volume of damaging discharges to coastal estuaries by upwards of 50 percent in conjunction with completion of all authorized Everglades restoration projects already underway. Additionally, these results meet the goals of the Comprehensive Everglades Restoration Plan, which is water manager-speak for sending an average of 98 billion gallons of treated water south into the Everglades each year. Our team is eager to report these findings to Senate President Joe Negron and the Florida Legislature in January 2018.

SFWMD Taking Action to Move Water into Florida Bay
Florida Bay is a region near and dear to your readership’s heart. We are kindred spirits because its well-being and that of the northern estuaries is at the foremost of this Governing Board’s priorities. In July 2016, SFWMD scientists and engineers began implementing an innovative plan to deliver much needed fresh water to Florida Bay. A year later, the construction has been completed. The District is now executing the plan to deliver billions of gallons of needed clean fresh water to Taylor Slough, which ultimately makes its way through sheet flow into Florida Bay. This additional water, which meets stringent water quality standards, will reach the northeastern part of the bay where droughts and elevated salinity levels killed seagrasses in the past. The best part of the plan is that this new water is reaching the bay during this dry season when it is needed the most.

Water Quality Improving Dramatically
Earlier this year, a major piece of Gov. Rick Scott's $880 million Restoration Strategies Plan was finished when the District began operation of the L-8 Flow Equalization Basin in western Palm Beach County. This and the other projects in Gov. Scott's plan will bring the entire Everglades ecosystem into compliance with the state's stringent water quality standards. Overall, Florida has invested more than $2 billion to improve Everglades water quality over the last two decades. Before the Florida Legislature passed the Everglades Forever Act in 1994, water flowing south out of the EAA contained an average of 173 parts per billion (ppb) of phosphorus. Thanks to the District's efforts, phosphorus levels in this Everglades-bound water have been reduced, on average over the last five years, to 19 ppb. Tests show at least 90 percent of the Everglades now meets ultra-clean water quality standards for levels of phosphorus at 10 ppb or less required by state law. The average total phosphorus concentration of water in Everglades National Park is reported to be approximately 4 ppb.

Septic Tanks Played a Role in the Health Warnings Associated with the St. Lucie Estuary
Lastly, I wanted your concerned readership to have the whole story when discussing what your article referred to as “black,” “toxic” and “highly polluted” water. Yes, Lake Okeechobee discharges played a role in the issues you discuss but so too did septic tank run off from Martin County, which has consistently plagued the waterway. According to the Florida Department of Health as of 2016, there are approximately 29,000 septic tanks in Martin County and about 44,000 septic tanks in St. Lucie County. Since 1991, about 28,000 septic tanks in these two counties combined have had to be repaired.

Extensive scientific research commissioned by Martin County has shown that “pollution from septic tanks poses a significant threat to our waterways.” This research also revealed that numerous sites throughout the estuary showed consistently elevated levels of fecal coliform, as well as traces of chemical markers that prove the bacterial levels harming estuary water quality came from human waste. Florida Department of Health sampling found elevated bacterial levels from septic tanks were discovered throughout the estuary even during times when no releases were being made from Lake Okeechobee. Martin County thought pollution from septic tanks was of enough concern to the health of the St. Lucie Estuary that it created an engineering plan to convert more than 10,000 properties with septic tanks in several high-priority neighborhoods to sewers to eliminate the pollution. Despite being ranked as one of the highest priority areas, the Town of Sewall’s Point voted to reject an agreement with Martin County to convert to a sewer system. If the commissioners of the Town of Sewall’s Point cannot ask their wealthy residents to do their share to improve the estuary by converting to sewers, how can residents throughout South Florida be continually asked to invest countless billions of their taxpayer dollars to improve the St. Lucie Estuary’s water quality for them?

Others are doing their part to reduce Lake Okeechobee releases and local basin runoff to help the estuary. It is time state and local officials representing the interests of the Treasure Coast do their part and invest in fixing the problem of septic tank pollution. I urge those of you who truly want to make a difference in securing clean water for the St. Lucie Estuary to write to your legislators, appear before Martin County commissioners in meetings and raise your concerns. Let’s ensure this progress we’ve made in water quality isn’t all for naught because of some residents’ refusal to step into the 21st century, convert to sewers and do what’s right for the water that flows through their own backyards.